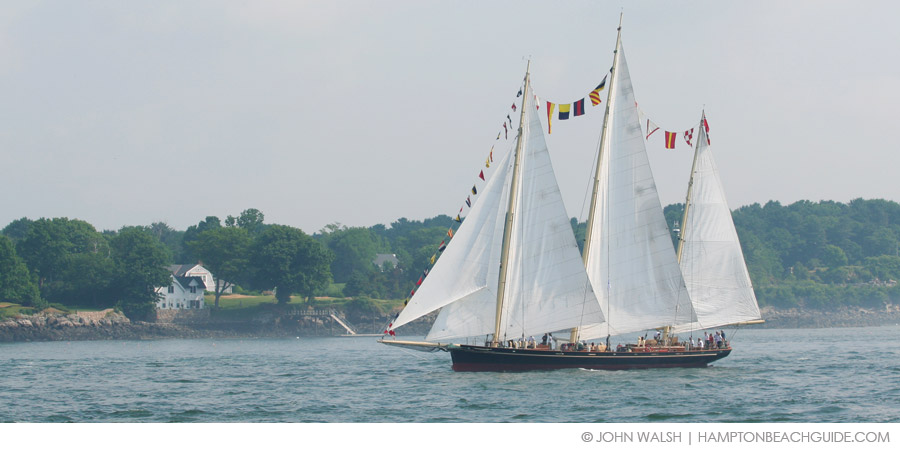 Seacoast NH – History is Right Down the Road

The Seacoast region of New Hampshire fostered some of the earliest settlements in New England. Enjoy its rich history, dating back to the Colonial Period.

Riding along coastal Route 1A, you’ll begin discovering some interesting facts about the area. In Rye, just north of Jenness Beach, is a historic marker, which reveals the site of a Sunken Forest formed during the Ice Age, and it also discloses that you’re at the spot of the first receiving station in America for the Atlantic cable. At low tide you can see remnants of the Sunken Forest.

Further up the road, you’ll find another historic marker regarding the Isle of Shoals, a group of nine islands shared by the states of New Hampshire and Maine. The Isle of Shoals was the site of the grisly Smutty Nose Murders. On March 6, 1873, Louis Wagner is said to have rowed out to the island of Smutty Nose to steal money from some inhabitants and ended up murdering two of them with an ax. Wagner was eventually tried and hanged, although to the very end he claimed to be innocent.

When you get to Odiorne Point State Park, you’ve arrived at the spot of the first settlement in New Hampshire. In 1623, Englishman David Thomson established the initial settlement in an area that had only been briefly visited by the native Pennacook and Abnaki tribes. You’ll also find more of the sunken forest on the south end of the park and also see parts of Fort Dearborn, which was constructed during World War II to guard the Port of Portsmouth and the historic Portsmouth Naval Shipyard.

In Portsmouth, there’s no end to historical buildings. The famous Strawbery Banke Museum has recreated four-centuries of life in America. Restored homes, authentic gardens, antique furniture and implements, and museum personnel reveal what life was like for residents in the 17th, 18th, 19th and early 20th centuries. You can easily spend a day touring through the 40 buildings and acres and acres of land occupied by Strawbery Banke. After you take the tour of the Banke, you can cross the street and stroll through beautiful Prescott Park.

The fact is if you go off the beaten path in Portsmouth, Newcastle, Rye or any of the other communities, you’ll find old graveyards, memorials and historic markers commemorating the lives and deaths of natives and colonist from the mid-17th century to the present. There’s history everywhere for those who are interested.