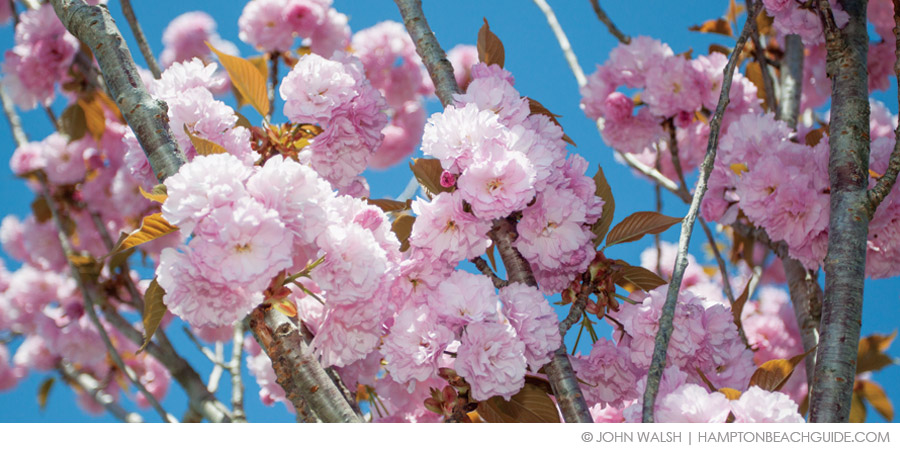 The State’s Coast and Surrounding Area will Stimulate Your Senses

Scenic vistas, magnificent natural formations and intimate settings are just a few of nature’s elements that make visitors stop to contemplate the attractiveness of this region.

From various parts of the Rye coastline you can see the Isle of Shoals, which are located in New Hampshire and Maine. These nine rocky islands have hosted fishermen, vacationers and pirates. Legend has it that the infamous pirate Blackbeard buried his treasure on one of them. At times, depending upon atmospheric conditions, the islands give the illusion when viewed from the mainland that they are in the air, floating above the water. Daily trips to the islands depart from Portsmouth Harbor. There’s a hotel on Star Island, which hosts retreats and conferences only. Explorer Captain John Smith discovered these islands in 1614.

There’s always something in bloom at the magnificent Fuller Gardens. Located along Route 1A near the border of North Hampton and Rye, the gardens feature over 1,700 rose bushes and hundreds of varieties of these wonderful flowers. The beautiful gardens offer a sanctuary to which visitors can escape. Stroll amongst the English perennial borders and enter the Japanese Garden through artistically sculpted hedges. Contemplate the authentic Koi pond. Look out over the ocean and feel the moist and refreshing sea breeze late in the afternoon. It’s a refreshing stop.

There are two fine science centers located along the coast, one in the southern part – the Science and Nature Center at Seabrook Station in Seabrook-and the other near the northern part of the coast – the Seacoast Science Center at Odiorne State Park in Rye. The Science and Nature Center at Seabrook Station offers numerous educational programs for families about nuclear energy and the ecosystem that surrounds the Seabrook Nuclear Power Plant. There are hands-on programs, a nature trail and many educational displays, including a marine touch pool.

In Rye, Odiorne Point State Park serves as the setting for the Seacoast Science Center. The rocky coastline at this park is great for tide pooling, while numerous picnic areas, a playground and 330 acres of space make this a wonderful spot for a family outing. The remnants of Fort Dearborn, which was built on the spot during World War II, can be explored. Great views are plentiful.

The Seacoast Science Center at Odiorne teaches kids and adults of all ages about marine life. It has numerous interactive exhibits, a hands-on tide pool and many special educational programs held both inside and outside the center. It’s a very popular stop for kids and adults.

These, and many other sites, will help connect you directly to the natural beauty that’s been preserved and is treasured by the residents of coastal New Hampshire.